London is urban. It can be a bit scruffy and rough around the edges. It’s full of city-grime, big hulking blocks of concrete and plenty of noisy, pollution-spewing traffic. But it also has a softer side that creeps out of the woodwork when you least expect it, and can almost always be expected this time of year.

The global city grit still exists, of course – and if I didn’t find it slightly charming, I wouldn’t live here – but last week it was nearly forgotten for the annual celebration of blossoms and bright colours that inspires the urban garden lovers and desktop growers among us as well as professional horticulturists and garden designers from around the globe.

The Chelsea Flower Show just wrapped up after bringing in a sold out crowd of some 160,000 garden enthusiasts to see the world’s most prestigious flower show once again. Chelsea in Bloom takes place the same week when local shops make an effort to jazz up their window displays or shop fronts with floral design, this year to a carnival theme with lots of tropical colours and parrots. Southwest London is at its most vibrant at the end of May.

I was slightly disappointed not to be granted a press pass for Little Observationist this year after covering the Chelsea Flower Show for quite a few years in a row, but since Jorge works for the RHS, he shared a few free tickets with me nonetheless. It wasn’t as enjoyable as press day when you can wander freely, taking in the gardens without thousands of other people in the way all craning their necks to see the same thing though. We skipped quite a bit and I didn’t take as many photos as usual. It was actually quite stressful trying to enjoy the displays in the crowds, which made me appreciate those old press passes more than ever…

My parents are visiting from New York, so I brought them along and we had a nice day out. After the show, we stopped to eat a Lebanese lunch in Duke of York Square and walked around Chelsea in Bloom afterwards. As I always do when I’m in Chelsea, we stopped for tea at Paul to take to St. Luke’s Gardens to sit and relax for a bit.

One of the highlights at the Chelsea Flower Show was the carpet of thousands of red hand-crocheted poppies covering the grounds of the Royal Hospital. 300,000 of them were laid out across the ground and another 26,000 were set on stems to create an impressive display. The project was started by Australians Lynn Berry and Margaret Knight with poppies to honour their fathers who served in WWII. Volunteers from many countries heard about what they were doing and donated their own over the past few years so they’re all a bit different. Designer Phillip Johnson pulled it all together for Chelsea.

Another highlight was, as always, people watching and listening to the conversations that were going on around us. I think my favourite was (in a very posh accent from a woman in a straw hat with flowers): “There are so many people, I have to hold my coffee out in front of me – something like an Olympic torch.”

We skipped most of the main show gardens because there were simply too many people. There was also a 60-foot carriage from Belmond British Pullman train, but again, too many people to go in and have a look around. The artisan gardens were slightly more accessible and we admired the prettiest parking space I’ve ever seen with a mini parked inside. We also walked along to watch woodworkers demonstrate their craft and peak inside a gypsy caravan.

Along the main stretch, we found a cool treehouse that had a pull basket on a rope with a bottle of champagne inside and a round little, cushion-filled reading nook that I would love in my back garden (if I had one big enough). I also came across some recycled teak tables with paint in shades of blue that I will buy for our small garden. They’re by Kadai Firebowls, but aren’t listed on their website (and the website doesn’t do justice to all of the amazing stuff they sold in their stand). Need to track them down…

We stopped for a Pimms (um, where is Summer, London?) and had a look at some of the sculptures. There were grass pandas, driftwood mountain goats and stretching cats. My dad posed with a giant gorilla. There were also some fountains shaped like trees so that water dropped through the branches like rain. Very serene.

The weather held up for us and it didn’t turn into the Chelsea Shower Flow like it has in past years. I even took the coat off for about half an hour! 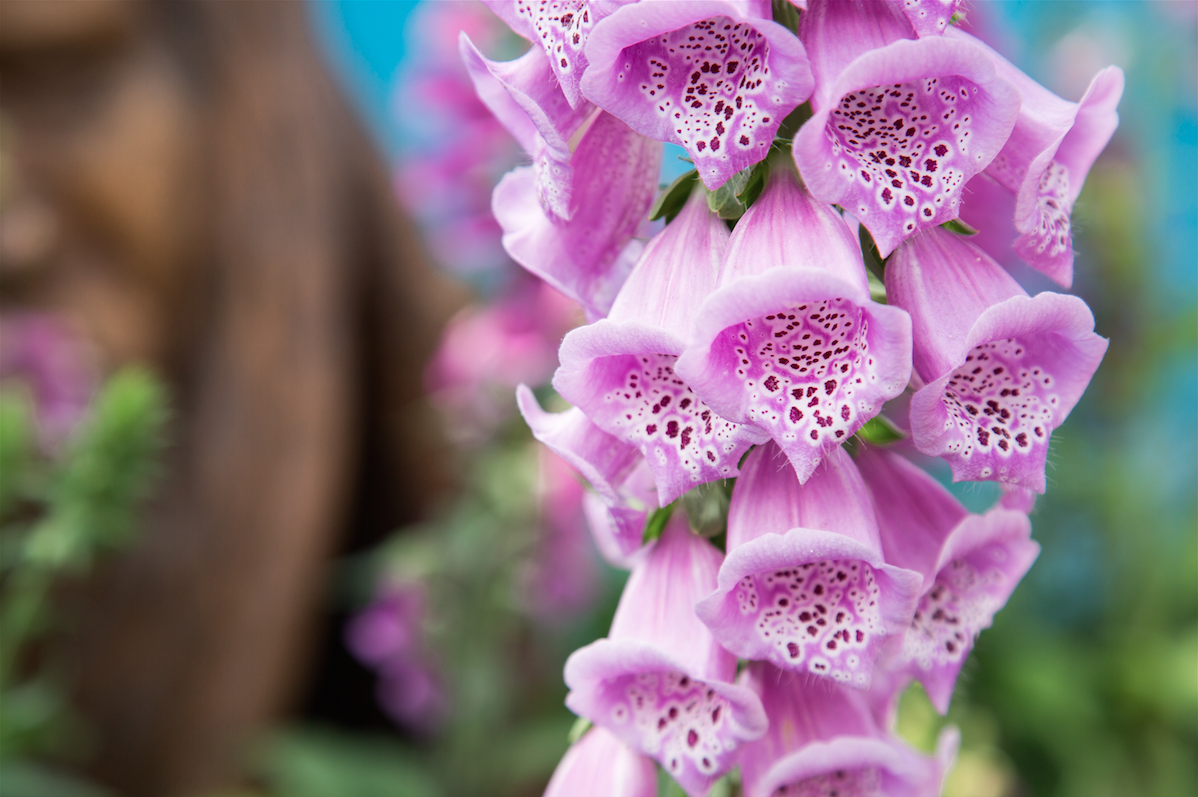 Chelsea in Bloom had some creative displays, but I don’t think as many shops participated this year so as a whole  it wasn’t as impressive as last year. Remember Kate Spade’s giant flamingos? Nothing this year from them, which was disappointing. There were lots of huge floral parrots though, and I loved all of the tropical plants involved!

It has really, truly been a week of plants for me. The previous weekend, Jorge and I went to a blogger event in Belgravia hosted by The Joy of Plants (an initiative I hadn’t heard of before from the Flower Council of Holland to help people appreciate plants, and they actually have a really lovely website!) and Red Magazine, which I was reading through while waiting for all of these photo to upload. They taught us plant meditation, how to create a cool hanging planter out of some rope and a cutting board, ran an Instagram workshop (#plantvitality) and sent us home with armfuls of beautiful plants. Here’s a few photos from that day before I sign off since they fit so nicely here:

And a handful of others from around Chelsea!

And now, an appropriately grey week of clouds and rain in London as the blooms disappear for another year.

These are affiliate links (but things I love), so I get a little kickback from any purchases (at no extra cost to you). This helps me pay for the hosting costs that keep Little Observationist alive (thank you!).