It was January 23, 2007. I was feeling quite exhilarated by the sound of the train flying over the tracks on my ride to Dartford. The sun had sunk below the clouds on a chilly Winter’s night. I sat in a nearly empty carriage, cramming an airport sandwich in my mouth and watching the outskirts of London fly by the rain-splattered window in a blur. 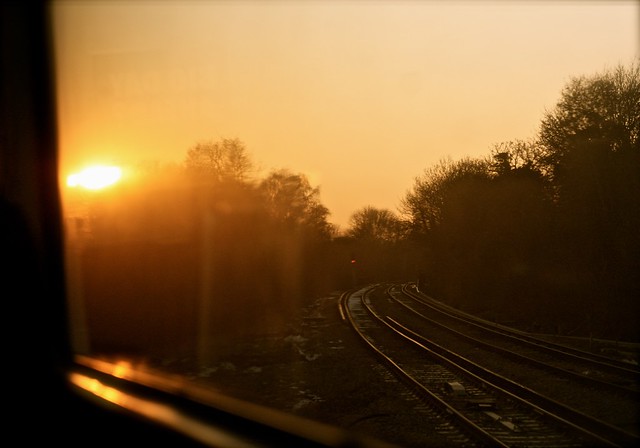 This was on the tail end of my trek across the city from Heathrow, across the ocean from New York via Chicago. London, which I hoped would be as sugar-coated as I remembered it from my brief semester abroad (I lived in Knightsbridge in a building full of Americans, took classes and a part time internship and spent most weekends abroad), was finally going to be my city. Just as soon as I found a job and a place to live, that is. In the meantime, my uncle and his family kindly put up with me. It took a month before I found myself sitting in the posh Hampstead living room of a painter and her CEO husband, trying very hard not to drip an ounce of tea on their beautifully upholstered sofa. Trying to pretend I was used to sitting on such a sofa. I must have done okay, because they gave me a chance, and I had my first job abroad as a marketing executive for an artist. 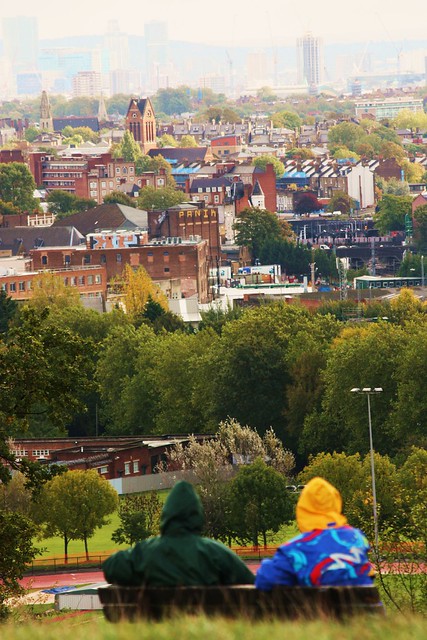 A week later, I unpacked my suitcase in the four bedroom house in northwest London that I was to share over the next two years with a rotating group of people – many South Africans, an Indian, an Israeli, a Brit, an Iranian-French girl and others. I remember contemplating the importance of buying sheets over the importance of buying dinner. Luckily, I received a lovely housewarming gift of pillows and a soft duvet. My first house was a party house, a lively and transient place, and certainly an international experience that mirrored this diverse city around me. I’ve lived in six different areas of West London over the years, each vastly different from the rest. And in 2011, I spent six months in a Colombian village, which is simply incomparable to anything in London. So the expat life is pretty familiar to me. Fast-forward seven years and I’ve just been invited to contribute to a fun campaign by HiFX who are gathering expat tips from bloggers. Hence all the reflection back to the beginning, trying to remember what it was like to start from scratch. 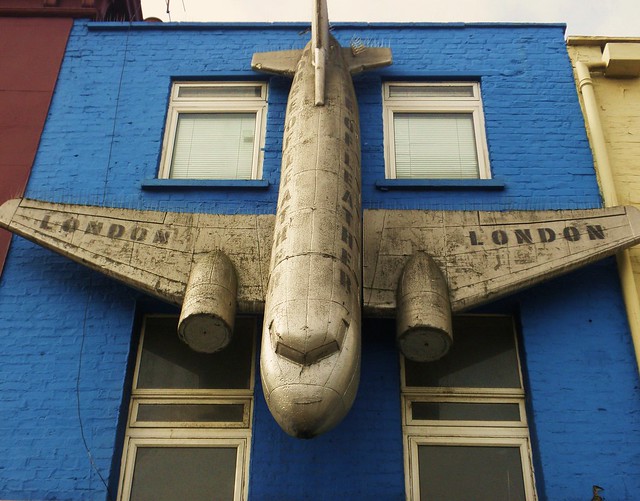 And so, here are seven of my best tips for anyone planning to move abroad:

1. LEAVE ANY GREAT EXPECTATIONS AT HOME. This is the most obvious tip to me. Moving here was nothing at all like studying abroad here. This was a whole different ball game, as they say back home. It took work to get myself truly on my feet, and I did have family here to help me out. I didn’t land my dream job at a travel magazine (but I had a job). There were days I survived on cans of tuna and Cadbury’s chocolate bars until I learned how to budget my money to last a full month till we next got paid (but I didn’t starve). In 2007, there weren’t many weekends abroad like I was spoiled with in 2004 (but when they came, they were appreciated even more). I wasn’t living across the street from Hyde Park anymore, but in the suburbs (but it was a wake up call to what life is really like here). I had an hour commute every morning on the tube and the overground and an uphill walk (but it gave me plenty of time to read and a bit of exercise). I waited in countless endless queues and dealt with the bureaucracies of opening a bank account, getting a mobile phone, applying for my British passport, registering for the NHS and other boring necessities (but it all worked out in the end). Don’t even get me started on Colombia.

2. KEEP AN OPEN MIND. As Dorothy would say, “Toto, I’ve a feeling we’re not in Kansas anymore.” Colombia was definitely about as opposite to my “Kansas” as I’ve ever been. One day, we trekked outside of the village to capture hundreds of flying ants the size of half my pinkie finger. They’re called hormigas culonas, or “big ass ants”, and indeed they were. I had ant farms as a kid, and this felt like childhood fun. Until we were gathered around the kitchen table with the rest of the family, sipping agua panela (hot sugarcane water) and picking the legs, wings and heads off of bucket loads of these creatures that were still alive and crawling everywhere. The table was littered with stray limbs, the twitching bodies piling up in a bowl. They were fried and salted – somewhat of a delicacy in Colombia, sold in bags along the roadsides when they’re in season. We ate them quite often, like popcorn, by the handful, while watching movies. They were crunchy, tasted like bacon and admittedly, delicious. In fact, I could eat a few right now. I have plenty of other stories, but that one should be good enough to illustrate that point. You never know what you might enjoy. 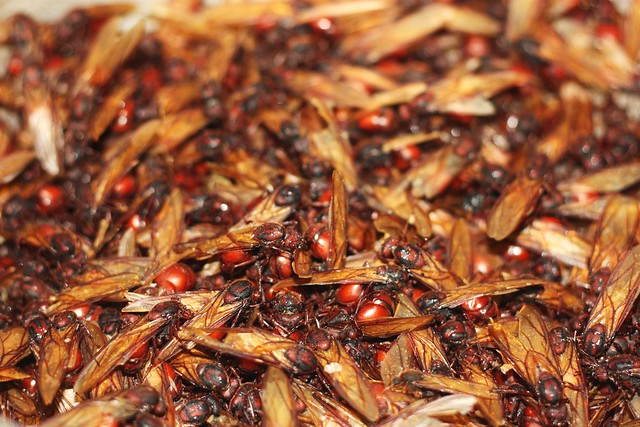 3. MAKE AN EFFORT TO CREATE A NETWORK. The best way to feel at home quickly in a new city (or village) is to say yes to just about everything in the first few months. It may be exhausting, but establishing a network and a community will make you feel more settled in. If you don’t know anyone at all, seek people out. For 12 years, I blogged on a website that closed down last week. In 2007, I organized a pub night with all of the Londoners I knew from there and I’m still good friends with a few who showed up that night. For a while, we met every Tuesday to try a new restaurant somewhere in the city and that helped turn acquaintances into frends. Other ways to meet people: Join groups like Meet Up and Internations that organize events. Reach out to local bloggers. Join a gym or a running (knitting / book / etc.) club. Go out of your way to get to know your colleagues at work if you already have a job. If you have kids, mingle with parents of their classmates.

Photo: With friends at my exhibition in November

4. DON’T SWEAT THE SMALL STUFF.  Most of these tips are clichés and they are clichés for a reason: they really are great advice. In this sense, I mean know that the world will not end if you lose your sense of direction while you’re walking to an appointment or if there is a tube strike and you have to plan an alternative route. I learned pretty quickly to ask myself what the worst possible outcome of a certain situation could be and whether or not, in a few years time, I’d be able to look back and laugh. So far, in just about every situation, the answer was yes. And that took the stress out of it. My first month in Colombia, I was in the primitive village hospital three times hooked up to fluids after severe food poisoning. This happened many other times over the next five months. At the time, it was horrendous, but now I look back and see it as just another of life’s experiences. I barely blinked the morning I woke up to a cockroach nestled in my toothbrush. Things could always be worse. 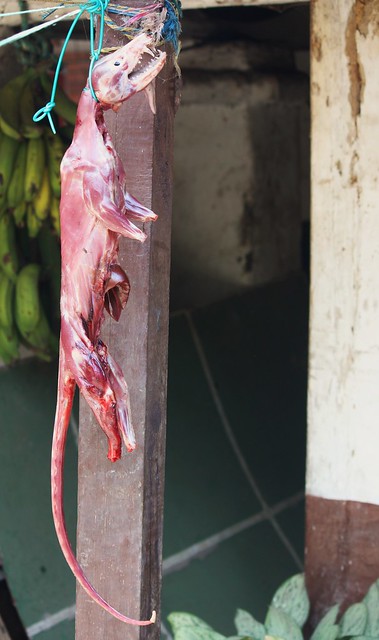 Photo: A creature, about to be dinner in Colombia

5. CRAVE LOCAL KNOWLEDGE. If there’s one regret I had about my time in Colombia, it was not finding the time to learn the language first. Granted, I left London in a flurry with a month’s notice, but my experience would have been richer had I been better able to communicate with the locals. No one who lived there spoke English. But beyond language, learn about the country’s customs and history. Stay away from the shops that sell American treats like mac & cheese and try the local cuisine. Read the newspapers. Read all of the books you can get your hands on that feature your new home. Read blogs. Be the person who asks a million questions. Find out where your neighbours go to drink their coffee instead of heading for the nearest familiar chain. Ask them where they buy fruit and bread. There might be a friendly farmer’s market around the corner. Seek out the independent bookshops and movie theatres and cheese rooms. Try a supper club instead of a chain restaurant. 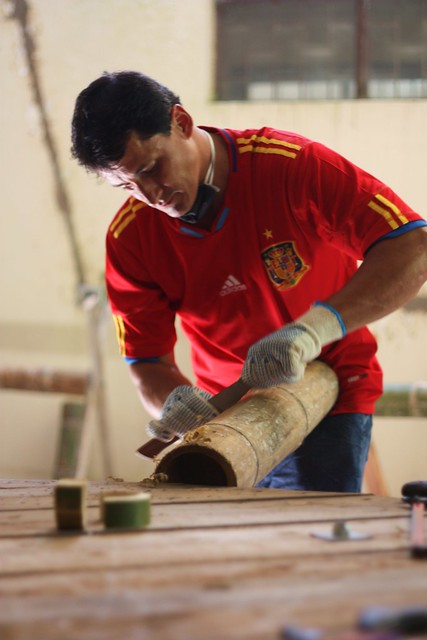 Photo: In Colombia, I took classes with locals to learn how to make furniture, mugs, jewellery boxes etc, out of guadua, a plant similar to bamboo

6. BE CURIOUS. I set myself the challenge of becoming something of an urban explorer when I moved to London, hopping on buses (bikes are also good) and jumping off anywhere that looked remotely interesting. I always carried a camera. It took me down alleyways like Blackall Street, the narrow, graffiti plastered lane in East London and into abandoned car parks where I discovered whole outdoor galleries of street art that I began to document. Soon, I set up my blog, Little London Observationist, through which I shared these observations with others and started to interview locals about their favourite hidden gems, the best restaurants and other places to explore. One day, I found myself on Lower Marsh Street, freezing cold and desperate for some hot chocolate before I faced the bitter wind that swept over the bridge where I had to cross the Thames. I saw a cat sitting next to a vespa in the window of a nameless red building. Looking past the cat, I realized it was a coffee shop – which has tuned into one of my best discoveries, and the place with the most delicious hot chocolate I’ve found so far. It was the quirky Scootercaffe, somewhere I’ve returned to time and again. 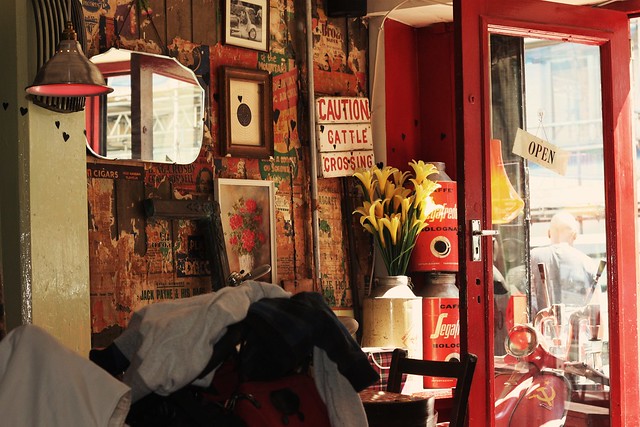 7. REFLECT. My blogs are infinitely important to me. While other people read them, it really is a selfish endeavour much of the time. They are places to store my memories and connect my new experiences to my past beliefs. I write and photograph my way to understanding the world around me and that’s what the expat lifestyle is really all about. If blogging’s not your thing, write letters home instead. Make time to reflect verbally, with a friend, over tea. Reflect through painting or drawing or music or whatever it is that works for you. It might not be something you realize until years later, but these are days you will want to remember. 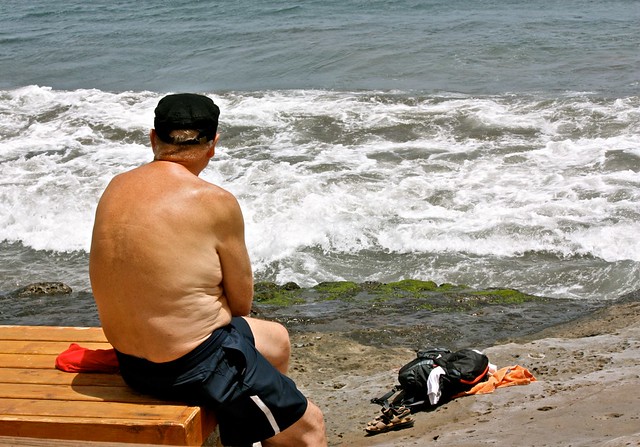 Feel free to leave some tips of your own in the comments!