A smoky, woodsy scent fills the air in Mogotes, Colombia, during the rainy season – around late March or early April. It means that the ants are ready to gather, cook and eat or sell. They are a favourite snack sold along the road sides in Colombia, a delicacy that can command quite a high price. Some are exported. You can find them in London, marketed as “Giant Toasted Ants” in Selfridges – a teeny tiny jar costs £17 ($28.50). Apparently they are considered an aphrodisiac. 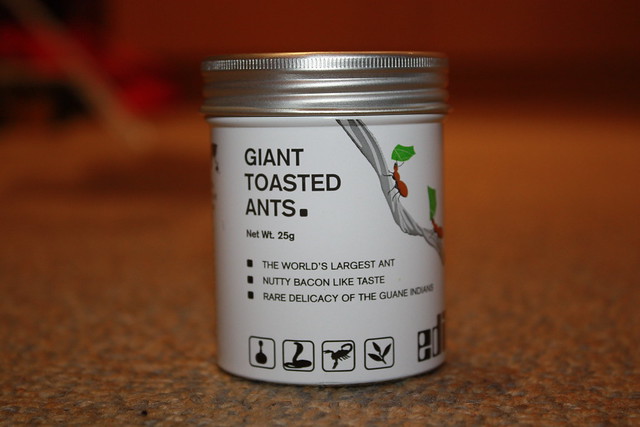 Their Spanish name is hormigas culonas, but they’re playfully referred to in English as “big-ass ants” – with good reason, as they are some of the largest ants I’ve ever seen in my life (and, as the world’s largest ant species, I can rest assured that they will remain the largest I see…).

They’re about as long as the top joint of your thumb. Their shiny bodies are split into three sections with long transparent wings attached and pinchers at the front of the head.

Early Spring, they emerge from huge ant holes in the ground to mate in the air. When this happens, the business kicks off and locals go hunting. Only the females are desirable to eat, so they are snatched up and brought home, still alive, in plastic bags. If you go, beware long trousers; I was warned that the ants will take the opportunity to crawl up them. Not ideal.

The ceremony around preparing the ants (at least where I experienced it), reminded me of the Autumn chowder season back in New York – in that it was a slightly festive atmosphere, there was anticipation to taste the final product and it was a family project.

And so, the family gathered around the table on a Saturday afternoon, the upbeat, cheerful rhythm of Latin music on the radio, and we set to work, ants crawling slowly over one another in metal pots, awaiting their grim destiny. Instead of tea and donuts that we’d eat on chowder making day, it was agua panela (hot water with cane sugar) and bits of arepa for dipping.

The hormigas were originally harvested by the Guane – the people who originally inhabited this region of Colombia. They were a source of protein. There’s not too many ingredients involved here, but the hormigas are quite rare so they are special.

First, reach in and grab a small handful of ants from the bowl at the centre of the table and place them in front of you – not too many as they may crawl off.

Choose your first victim. Grab the middle section of the body and hold tightly. With the other hand, quickly snap off the head sideways, avoiding pinchers. (Note: this is optional – some people like the texture of the heads, so they leave them on.) Now that the ant can’t see, you’re free to pick off the legs and the wings in any order you wish. Be warned: you may feel like a sadistic child pulling the legs off a helpless daddy-longlegs spider.

Toss the body of your ant into one bowl and the legs, wings and heads aside.

Once all of the ants are stripped of their limbs, take them to the kitchen. Wash very thoroughly (many times) in a strainer.

Sprinkle them with salt.

Leave them to soak overnight in a pot of salted water. They will stop wriggling around this time.

The next day, it’s time for the frying. No need to add oil to the pan; the ants secrete their own.

Cook on low heat, stirring constantly, for almost two hours. Like I said, this is a family project, to take turns or your arm will surely go numb. If you close your eyes, the kitchen takes on the smell of bacon frying slowly on a grate over a campfire in the woods.

You’ll notice at this point that any remaining wings that were missed the day before will fall off during cooking. They tend to stick to your spook or the sides of the pan so they are easily removed.

When the ants are ready to remove from the heat, the colour of their bodies changes to a dark brown and they become very shiny. The back section is dry. Spread them out to cool.

The ants are surprisingly tasty. Salted and fried, they have the smoky, earthy flavour of bacon with some crunchy bits and some meatier areas. The ants are enjoyed by the handful and make a great alternative to popcorn while relaxing with a movie.

Don’t drink water with them though – apparently it will give you a stomachache.

This video is in Spanish, but a little taste of the experience:

Boston Through the Lens