What I love most about London is the mishmash of cultures who live here, the fact that you can find the whole world in this city. So I’m excited to see the launch of Ed Hewitt’s app, World in London, which will lend a bit of organization into the multicultural experiences that can be found here. I thought it would be fun to pick his brain about this a bit more, find out some of the hidden gems he’s discovered in his reasearch and a bit about his travels along the Silk Road last year. He also has a great story about a nudist couch-surfing host. 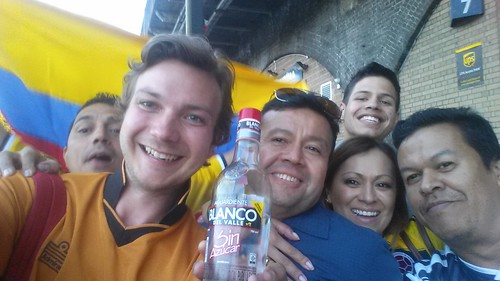 LO: Tell us a bit about yourself.
EH: I’m Ed, a 29-year-old male, 6ft 0, living in Hackney. More interestingly (I hope), I’m passionate about all things environmental, multicultural and most things which involve travel and sport. I was once in a band called Tokyo Trio (which featured a glockenspiel, recorder and a symbol. I was the recorderist). More recently I’ve set up a project called ‘World In’. It’s all about inspiring people to travel the world in their own city. The first city is London. It’s called ‘World in London’. More on that later…. 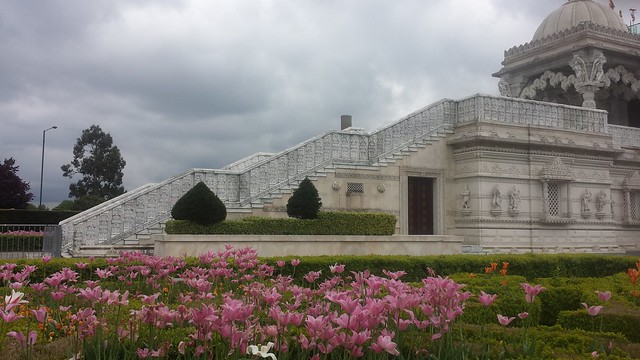 LO: You traveled the Silk Road from Thailand back to the UK last year. What did you learn about yourself and the world around you from that experience?
EH: I learned that if you put your faith in humanity then more often than not it is rewarded. I put myself in some pretty compromising situations – especially staying in the houses of so many random people who I met along the way (through ‘couchsurfing’ and hitchhiking). Whether it was a Kyrgyz shepherd in a yurt or an expat journalist in Beijing the hospitality and warmth I received everywhere was incredible. I found this to be a universal truth – you often hear people say ‘The people from this country are so friendly, more so than others’. I think it’s bullshit. From my experience people from all the countries I went through were just as welcoming.

I also learned there’s a big difference between an ‘amazing’ tourist sight and an ‘amazing experience’. Angkor Wat & the Great Wall of China are two good examples. Great sights, but awful experiences. Karakalpakstan (northern Uzbekistan) on the other hand: total shithole but brilliant experience!

And about myself? I realised that being on the road for so long, constantly moving, is actually pretty tiring and maybe not for me in the future. Don’t get me wrong – I loved the journey, but my favourite experiences were when I stayed in one place for an extended period of time and got to know it and the people.

LO: So now that you’re back from your travels, tell us about this project called “World in London”. What’s this all about? Why is it important to you?
EH: It’s the first step towards a bigger vision ‘World In’. London is the first city. It’s all about getting people to appreciate the ‘world’ in their own city as much as they do when they go 1000s of miles in search of adventure and culture. Specifically, it’s about making multicultural cities come to life, and moving away from us saying we live in multicultural cities to actually interacting with them.

Whilst I was away last year it struck me as odd that I (and so many others) went so far to experience new cultures before looking at all the opportunities on our own doorstep. When I got back I sought to ‘travel’ the world in London. I sought out many of the restaurants, music, and other cultural experiences I’d tried on the road and found them (and many more) in London. To my own surprise, I found it just as rewarding as actually travelling the world and the blogs I wrote about it got far more interest than anything I wrote from Kyrgyzstan. People could relate.

There was nobody who really owned the ‘multicultural’ market and bought everything together in one place so I thought I’d have a go. As well as being really fun to explore each other’s cultures on our doorstep, it’s also got loads of social and, arguably, environmental benefits too. 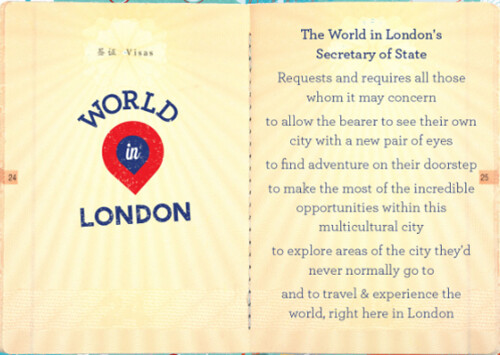 LO: I hear you are building an app. Tell us about how the app will actually function and what it offers to its users. Why will we want to use it? How much will it cost?
EH: Yes – the ‘World in London passport’ app is going to find the 10 best experiences from almost every nationality in London. It’ll also send you on little journeys around the ‘world’ in London. To make it a bit more fun, we’re theming it like a passport, and it will involve the collection of ‘stamps’ as you try different experiences from different nationalities/cultures.

The type of experience you’ll find on there ranges from Burmese supperclubs to Colombian concerts to multicultural walking and tasting tours to Russian Banya experiences. Just think of all the new things you like trying when you travel. Only you can do it here in London (except climb any mountains. We haven’t brought the Himalayas over for the Nepalese experience!)

The app is going to be free for users, but will cost us around £15k to make. To fund this we’ve just launched a crowdfunding campaign. It involves each person chipping in a bit to make it happen. Only unlike a charity donation, you get a really awesome reward of an equivalent (or better) value to what you pledge. For example £30 would get you a guided tour of an Iranian mosque, 3 course Iranian meal and an invite to our launch party. Other rewards represent the experiences described above.

Sound good? If so please check out the campaign, share it with your friends and even make a pledge if you really want us to do this:

LO: Will it include traditional British gems as well? Are there any countries not featured?
EH: Yep – of course; Britain is every much as part of the world as the rest. What it won’t have is anything touristy like Big Ben. We’ve been talking to a Milliner (hat maker) about an experience and a spoon making one too!

We’ve split the ‘world’ up into about 70 different entities. Some, like Brazil, will have their own section (as there are loads of amazing Brazilian things to do). But others will be bundled together into regions (for example Post Soviet Central Asia). There will also be ‘cross cultural’ sections for things which don’t fall neatly into one specific nationality and we are looking at splitting it by things such as religion which span nationalities. The actual process of dividing it up in a politically correct manner which keeps everybody happy is really quite difficult! 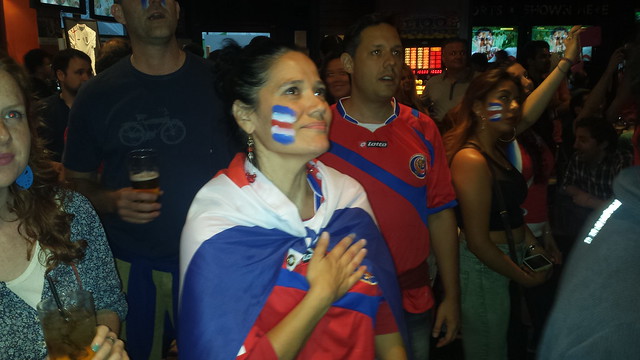 LO: Let’s do a quick rundown through some of London’s diverse communities. Share your favourite London gem that comes from each of the following countries that I randomly chose off the top of my head:
EH:
Thailand: Definitely Wat Budhapaddipa….. A beautiful, Thai temple in Wimbledon!
Colombia: Seven Sisters market (Pueblito Paisa). Amazing!
Burma: Awesome Burmese supperclub with thuzar Kyi. Can get one through the crowdfund!
Ethiopia: Injera restaurant in Dalston. It doubles as an internet cafe which is an interesting combo. But food is great!
Spain: Centro Gallego. Authentic ‘Galician’ restaurant frequented by Spaniards. Beats touristy tapas in Central London hands down!
Brazil: Take a capoeira class with Capoeira cardoa de Ouro.
India: There is an absolutely stunning Hindu temple up at Neasdon.
Turkey : There’s an ‘Anatolian festival’ in Clissold Park every year. It includes oil wrestling! 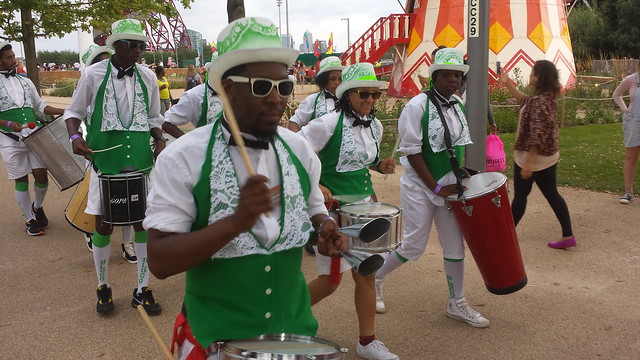 LO: Share a story of an interaction you’ve had in London with someone of a completely different background to you and why it was so memorable.
EH: I went ‘couchsurfing’ around London as part of my World in London research. I thought why not do it in my own city as I’d done it on the road so much. I stayed with a really interesting Indian guy who turned out to be ‘clothing optional’. I wasn’t entirely sure whether it was more of a ‘naked compulsary’ scenario or what, but opted for clothes. We discussed the pros and cons of nudism over dinner. It was certainly an enlightening experience – far removed from the slightly sleazy world I’d imagined. There wasn’t a hint of anything remotely sexual about it. Just free. ‘Off Off, you lendings’ to quote King Lear…. 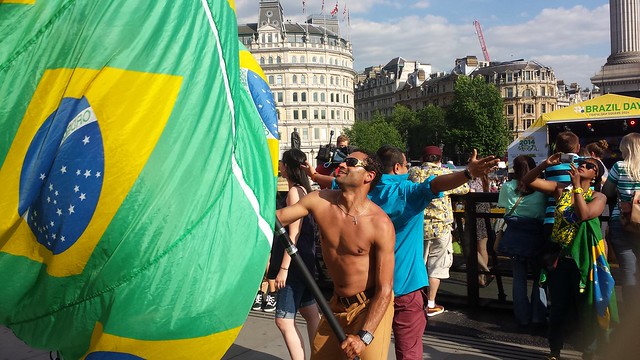 LO: What’s your personal favourite London discovery and why is it special?
EH: It’s a toss up between Neasdon temple for its sheer beauty, and Pueblito Paisa in Seven Sisters. It’s an incredible South American market which you just wouldn’t know existed if you drive past on the bus. Open these doors and you are transported to Bogota – Latin music blaring, only Spanish spoken, lashings of huge meat dishes being served up, ladies in nail salons – the lot. For me, it’s what World in London is all about – discovering the hidden things you would normally pass in your every day life. 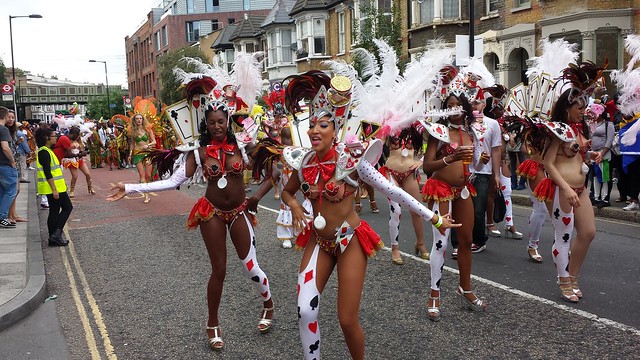 LO: Little Observationist is all about appreciating life’s little luxuries. What are three that come to mind that you’ve recently enjoyed?
EH: I’m not sure I’m really a ‘luxury’ kind of person but luxuries of a certain kind have recently included:
1) Accompanying the Costa Rica fans around London during their incredible World Cup run. Over half the entire Costa Rican population of London gathered in one single bar for their match vs the Netherlands
2) Getting wrapped in birch leaves and pummelled at the Russian Banya between Old Street and Islington.
3) Hearing Colombian band Jonny Freyre & Kalima project at a ‘Children of the Andes’ night at Floripa in Shoreditch a couple of months ago. 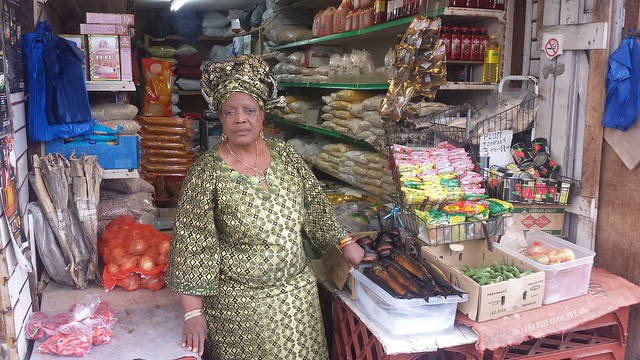 LO: What keeps you motivated every day? What sort of daily routines do you have?
EH: I guess I’m motivated by the vision of what this could become – but also by the fear of failure. Every morning I get up and pretend I’m a kangaroo – hopping around and doing some weird stuff with my arms. Only joking. I don’t have any morning rituals other than turning off the alarm! Escape the City was a huge inspiration for me when I first left the corporate world to embark on a more exciting career path.